Thresher sharks are considered top predators even though there are not the largest sharks in the ocean.Thresher sharks are approximately 15 to 20 feet in length with their caudal tails composing half of that.They are usually a dull brown to blue in color with a pale white underbelly.The female thresher shark can live up to around 24 years while the males usually live to around 22 years (Gervelis et al 2013).Grown thresher sharks spend their time in the open ocean near coasts throughout the world, diving down to 500 meters at times.The pups and juvenile thresher sharks tend to be found near barrier reefs where they are more protected from predators and have a large supply of food.Females give birth to only a few live young, yet these are young are healthy and very well developed. These sharks are normally daytime hunters but have been seen hunting at night as well.The thresher shark is a solitary hunter, but will congregate together if there is ample prey.The main staples in the threshers’ diet are tuna, mackerel, squid, sardines, cuttlefish, and the occasional bird (Cartamil et al 2010).Human interactions with the thresher shark are usually harmful to the shark and not to the human.No attacks on humans have been reported although some divers have been smacked by the threshers’ tail as the shark swims away.Thresher sharks are hunted for use of their liver, skin, meat, and fins and have been hunted so heavily that they are now considered to be endangered (Ferretti et al 2008).

Thresher sharks have extremely long caudal tails, which they use to smack and stun their prey (Oliver et al. 2013).As the fish group together the thresher shark is able to slap multiple fish at a time saving energy.The long caudal tail also allows the thresher shark to reach great speeds and turn sharply in pursuit of prey.The tail is used as a rudder to allow quick movement.Unlike other sharks the thresher has the ability to jump straight up completely out of the water and dive back in nose first instead of flopping on its side.This adaption allows the shark to catch prey that might otherwise escape and thus not waste energy chasing new prey.The thresher shark has a line of red muscle along the side of their body.This red muscle contains many blood vessels that allow the sharks’ metabolic heat to radiate towards the center of the shark (Sepulveda et al. 2005).This adaption helps the thresher shark to maintain its internal body temperature which is extremely useful at certain depths, such as those that the Big-eye thresher goes to. The thresher shark also has a line of receptors, called ampullae of Lorenzini, on its’ snout that detect electromagnetic pulses.These pulses are given off by every living thing, such as struggling prey which give off electrical pulses that the thresher shark is attracted to. As with most sharks the thresher shark also has an amazing sense of smell and are able to detect one part per million of blood in the open ocean (Smith et al. 2008). With these adaptions sharks are some of the best predators on the planet.They have not had to adapt much in over 60 million years as they are well suited to their environment.

Thresher sharks are large lamniform sharks of the family Alopiidae found in all temperate and tropical oceans of the world; the family contains three extant species, all within the genus Alopias.

All three thresher shark species have been listed as vulnerable to extinction by the World Conservation Union since 2007 (IUCN).[2] All are popular sport fish. In addition, they are hunted for their meat, livers (for shark liver oil), skin (for leather), and fins for use in shark-fin soup. 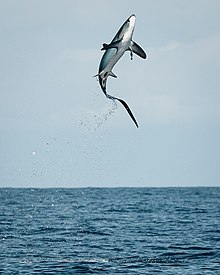 They do not appear to be a threat to humans.

The genus and family name derive from the Greek word ἀλώπηξ, alṓpēx, meaning fox. As a result, the long-tailed or common thresher shark, Alopias vulpinus, is also known as the fox shark.[3] The common name is derived from a distinctive, thresher-like tail or caudal fin which can be as long as the body of the shark itself.

The three extant thresher shark species are all in the genus Alopias. The possible existence of a hitherto unrecognized fourth species was revealed during the course of a 1995 allozyme analysis by Blaise Eitner. This species is apparently found in the eastern Pacific off Baja California, and has previously been misidentified as the bigeye thresher. So far, it is only known from muscle samples from one specimen, and no aspect of its morphology has been documented.[4]

Based on cytochrome b genes, Martin and Naylor (1997) concluded the thresher sharks form a monophyletic sister group to the clade containing the families Cetorhinidae (basking shark) and Lamnidae (mackerel sharks). The megamouth shark (Megachasma pelagios) was placed as the next-closest relative to these taxa, though the phylogenetic position of that species has yet to be resolved with confidence. Cladistic analyses by Compagno (1991) based on morphological characters, and Shimada (2005) based on dentition, have both corroborated this interpretation.[5][6]

Within the family, an analysis of allozyme variation by Eitner (1995) found the common thresher is the most basal member, with a sister relationship to a group containing the unrecognized fourth Alopias species and a clade comprising the bigeye and pelagic threshers. However, the position of the undescribed fourth species was only based on a single synapomorphy (derived group-defining character) in one specimen, so some uncertainty in its placement remains.[4]

Although occasionally sighted in shallow, inshore waters, thresher sharks are primarily pelagic; they prefer the open ocean, characteristically preferring water 500 metres (1,600 ft) and less. Common threshers tend to be more prevalent in coastal waters over continental shelves. Common thresher sharks are found along the continental shelves of North America and Asia of the North Pacific, but are rare in the Central and Western Pacific. In the warmer waters of the Central and Western Pacific, bigeye and pelagic thresher sharks are more common. A thresher shark was seen on the live video feed from one of the ROVs monitoring BP's Macondo oil well blowout in the Gulf of Mexico. This is significantly deeper than the 500 m (1,600 ft) previously thought to be their limit. A bigeye has also been found in the western Mediterranean, and so distribution may be wider than previously believed, or environmental factors may be forcing sharks to search for new territories.[7]

Named for their exceptionally long, thresher-like heterocercal tail or caudal fins (which can be as long as the total body length), thresher sharks are active predators; the tail is used as a weapon to stun prey.[8][9] The thresher shark has a short head and a cone-shaped nose. The mouth is generally small, and the teeth range in size from small to large.[10] By far the largest of the three species is the common thresher, Alopias vulpinus, which may reach a length of 6.1 metres (20 ft) and a mass of over 500 kilograms (1,100 lb). The bigeye thresher, A. superciliosus, is next in size, reaching a length of 4.9 m (16 ft); at just 3 m (10 ft), the pelagic thresher, A. pelagicus, is the smallest.

Thresher sharks are fairly slender, with small dorsal fins and large, recurved pectoral fins. With the exception of the bigeye thresher, these sharks have relatively small eyes positioned to the forward of the head. Coloration ranges from brownish, bluish or purplish gray dorsally with lighter shades ventrally.[11] The three species can be roughly distinguished by the primary color of the dorsal surface of the body. Common threshers are dark green, bigeye threshers are brown and pelagic threshers are generally blue. Lighting conditions and water clarity can affect how any one shark appears to an observer, but the color test is generally supported when other features are examined.

The thresher shark mainly feeds on pelagic schooling fish such as bluefish, juvenile tuna, and mackerel, which they are known to follow into shallow waters, as well as squid and cuttlefish.[12] Crustaceans and occasionally seabirds are also taken. The thresher shark stuns its prey by using its elongated tail as a weapon.

Thresher sharks are solitary creatures that keep to themselves. It is known that thresher populations of the Indian Ocean are separated by depth and space according to sex. Some species however do occasionally hunt in a group of two or three contrary to their solitary nature. All species are noted for their highly migratory or oceanodromous habits. When hunting schooling fish, thresher sharks are known to "whip" the water.[11] The elongated tail is used to swat smaller fish, stunning them before feeding. Sometimes the thresher shark will slice the fish in half before eating.[13] Thresher sharks are one of the few shark species known to jump fully out of the water, using their elongated tail to propel them out of the water, making turns like dolphins; this behavior is called breaching.

Two species of the thresher have been identified as having a modified circulatory system that acts as a counter-current heat exchanger, which allows them to retain metabolic heat. Mackerel sharks (family Lamnidae) have a similar homologous structure to this which is more extensively developed. This structure is a strip of red muscle along each of its flanks, which has a tight network of blood vessels that transfer metabolic heat inward towards the core of the shark, allowing it to maintain and regulate its body heat.

No distinct breeding season is observed by thresher sharks. Fertilization and embryonic development occur internally; this ovoviviparous or live-bearing mode of reproduction results in a small litter (usually two to four) of large well-developed pups, up to 150 cm (59 in) at birth in thintail threshers. The young fish exhaust their yolk sacs while still inside the mother, at which time they begin feasting on the mother's unfertilized eggs; this is known as oophagy.

Thresher sharks are slow to mature; males reach sexual maturity between seven and 13 years of age and females between eight and 14 years in bigeye threshers. They may live for 20 years or more.

In October 2013, the first picture of a thresher shark giving birth was taken off the coast of the Philippines.[14]

Thresher sharks are large lamniform sharks of the family Alopiidae found in all temperate and tropical oceans of the world; the family contains three extant species, all within the genus Alopias.

All three thresher shark species have been listed as vulnerable to extinction by the World Conservation Union since 2007 (IUCN). All are popular sport fish. In addition, they are hunted for their meat, livers (for shark liver oil), skin (for leather), and fins for use in shark-fin soup.

They do not appear to be a threat to humans.